Happy New Year! I can’t believe it’s already 2017! What a wild and random year! One of the accomplishments I’m most proud of from 2016 is the fact that I restarted this book review blog (even giving it a nifty facelift along with with it’s own URL). I want to keep the momentum going and try to update as much as possible this year. Also, if any of you are interested, I’ve started an Instagram account with daily updates of what I’m reading. You can read along with me as I navigate the fiction world. I’ll be posting photos, excerpts and nifty quotes I find along the way. The new Instagram handle is: @andreasbookreviews

Now, let’s get started on the new book review for 2017! I thought since I last left off with our favorite French writer, Françoise Sagan, I should continue with another one of my favorite female writers, this time from England. Today, I present to you, Tessa Hadley’s newest novel, The Past.

Now, a little background about Tessa Hadley. She published her first book at the age of 46 and has been on a role ever since. She flip flops between novels and short stories and has been a darling of the fiction section of The New Yorker. In fact, as an avid reader of The New Yorker, I stumbled upon this fantastic writer by reading one of her many short stories that are published through out the year. She’s not the most thrilling writer, in that there aren’t many adventures or dynamic plot twists in her novels and short stories, rather they deal with family life, the home, and the subtle interiors of character’s lives. Many have stated that her work is a lot like watching the paint dry on a masterpiece. She’s a beautiful writer with incredible technique, that much is always acknowledged, but her stories don’t have that kick that most American’s love in their fiction. In fact, she’s stated in interviews that none of her stories have that plot device where something exterior from the character’s lives is what is driving the plot, rather everything has to do with the interior of the character. A shift in the room. A subtle gesture that means more than what it should, that kind of advancement in plot. I hope this doesn’t sound boring, because I absolutely adore her work! Everything feels so incredibly intimate and nostalgic in her writing that I become so engrossed in her works that nothing can distract me or take me out of my reading trance.

Now, let’s get started on this review. The Past is about the Cranes – three sisters, a brother, and their children –  who gather for three weeks in the summer at their grandparents’ old

house in Kington, Somerset. The reason for their holiday is to decide whether they should keep this old house or finally give it up. The first sibling introduced is Alice, the middle sister, the would-be actor and poet, who arrives in a taxi with Kasim, her ex-boyfriend’s 20-year-old son, whom she has impulsively, and without consulting her sisters, invited. Next is Fran, the schoolteacher and youngest sister (with a conception that no one is aware of including herself, but I, personally, found so delicious), who arrives with her two young children, the adorable and hilarious Ivy and Arthur, and a car full of groceries but no husband; Jeff, a musician, has gigs to play. Meanwhile, Harriet, the oldest sister who works with asylum seekers, arrived first but we don’t meet her until later as she has decided to go out for a nature walk. Her absent partner, Christopher, remains a shadowy background figure. Lastly, there is Roland the only son and favorite of his mother, Jill. He a philosopher, who has enjoyed intellectual fame as film reviewer. He phones when the others are already eating dinner to announce that he, his third wife, Pilar, and his 16-year-old daughter, Molly, will arrive the following day.

Once everyone has gathered, that’s when the magic happens. Although, to be quite honest, the magic happens as soon as we have a description of the beautiful, yet dilapidated house. Everyone appreciates the house, yet no one can afford to maintain it. The roof is leaking. There is dust everywhere. It’s falling apart. But this house and the English countryside is what holds the characters in the novel. This quote from the novel perfectly encapsulates the feelings of family:

“All the siblings felt sometimes, as the days of their holiday passed, the sheer irritation and perplexity of family coexistence: how it fretted away at the love and attachment which were nonetheless intense and enduring when they were apart. They knew one another so well, all too well, and yet they were all continually surprised by the forgotten difficult twists and turns of one another’s personalities, so familiar as soon as they appeared.”

Each character enjoys their three weeks of vacation, but of course there is always a bit of drama that happens when a family is stuck together in a isolated area (there isn’t even reception or WiFi at the house!). The intruder of the family getaway, Kasim, starts a romance with the flighty and fun, Molly. The children, Ivy and Arthur, start their own bizarre cult and become obsessed with the blooming romance between Kasim and Molly, to the point that they become actively part of the pre-coitus moment between the two, which is hilarious, adorable and disturbing. The shy and timid Harriet falls in lust with Roland’s exotic and mysterious wife, Pilar, with dire consequences. The other siblings are too busy with their own interior monologue to have any external drama, but they are savvy enough to figure out what is going on around them.

The story is really about family dynamics and how the past keeps knocking at the door of the present. At first, its in dialogues from each sibling and midway through the novel in a lengthy flashback. The two present-day sections frame a middle act, set in 1968, when their mother, Jill, decides to leave her cheating husband in London and seek refuge with her parents in the country with her three children – Harriet, Roland and baby Alice – in tow. What we see from this flashback is that the past is not how the present characters believe it to be. The romance they associate with their family is not as idealized as each character remembers and the same situations that troubled their parents and grandparents in the past are exactly the same in the present with the siblings. It’s actually fairly interesting to see how each character is almost in an identical situation as their ancestors. For example, Fran’s musician husband sounds oddly familiar to her mother, Jill’s relationship to their father, Tom, the revolutionary and writer. Nothing really is original, even the dynamics of past lives are constantly repeated at nauseam in the present.

There is a little twist in The Past section set in 1968 that comes back at the very end of the novel. In retrospect, Tessa Hadley always does this in her novels! She always puts in this little tidbit that is rather scandalous – a woman sleeping with her best friend’s husband, a woman becoming pregnant by her significant other’s son, a baby born out of an affair – but its always treated as if it’s just a footnote in the overall story. No one acknowledges this rather large shift in trust and social norms, so you as the reader feel strange in acknowledging it as something big. The same applies to this novel. I won’t give away what the little scandal is (it involves Fran…I poked at it above when introducing her character), but I found it rather interesting that she chose to include this little secret that we, the readers, are privy to, but no one else is and no one in the novel seems to care.

These characters are not going through huge, life-changing adventures, but the story and the writing were engulfing. It’s nice to see siblings interact in a friendly manner, sure they have little grievances, but overall, it’s a healthy and loving family. The writing and descriptions of the countryside are also so pleasurable and lively that you feel like you are in Kingston taking a stroll to a little waterfall. So, would I recommend The Past? I would! It’s a relatively short novel with interesting characters, beautiful writing and in the mist of winter, a nice mental getaway to a summer in the English countryside. You might even end up becoming a fan like myself and reading all of Tessa Hadley’s work! 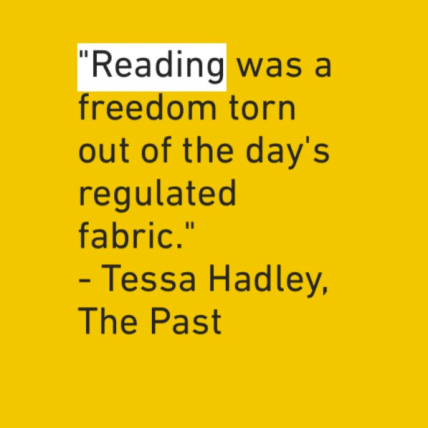 **After being asked by several people, I’m going to include Amazon Affiliate links to the reviews that I am writing. I am not being paid for any reviews nor are these links influencing my opinions. It’s just an easy way to share the exact same edition / translation of the book that I just read. Also, if you purchase the book, that’s a little thank you from you to me! Here is the link for this particular book (it’s the same exact edition that I read!):The Past: A Novel