New month, new book review! I’m trying to read books that came out in 2016 and during this search I came upon the second novel by Elizabeth McKenzie, The Portable Veblen, which was published in the beginning of the year. The novel is about the positive, whimsical, and stunted Veblen Amundsen-Hovda who is recently engaged to the intelligent, sweet and ambitious neurologist, Paul Vreeland. The book begins with the couple of three months getting engaged and what follows are all of the perils, trials, and laughs that happen in between the wedding.

How much can you know a person after three months of dating? Is that enough to join into matrimony? More importantly, how much does your childhood and your family affect your present life? Where does family end and a person becomes their own person?

There are two parallel plots in the novel. The first being the couple getting to know each other before their eventual marriage, by way of getting to know their future in-laws. This plot delves into the characters trying to internally work out their less than pleasant childhoods at the face of their not very good parents. The second plot is the couple trying to understand themselves and their goals, which of course, change as the plot progresses. Thrown between these plots is a squirrel that has taken residence is Veblen’s cozy cottage in Palo Alto, which Paul considers a “pest” and Veblen considers a “friend.”  And Paul’s invention, the Pneumatic Turbo Skull Punch, a device meant to treat battlefield head trauma, which has been eagerly bought by Hutmacher Pharmaceuticals and set to be used by the Department of Defense.

Ethics play a lot in this novel. It’s very easy to say that what happens with Paul’s invention and it’s involvement with Hutmacher Pharmaceuticals is not ethical at all, however one can also argue that the parents of the main characters are also not very ethical. In fact, it looks like all of the parents in this novel are not particularly good parents. But then again, what makes a good parent?

Veblen and Paul cannot seem to move onto the next stages of their lives until they come to terms with their childhood and the behavior of their family. Veblen is stunted and an emotional doormat to the needs of others. She tells Paul on the night of their engagement:

“I have this strange thing. If someone around me is bothered by something, I feel like I’m not allowed to be bothered.”
“Not allowed?”
“It’s like I’m under pressure from some higher source to remain calm or neutral, to prevent something terrible from happening.”

This stems from her mother, a narcissist and hypochondriac, who does nothing but complain about her various illnesses and whom Veblen starts to realize once she leaves home, “She began to realize she hadn’t been looking for a love affair, but rather a human safe house from her mother. A legitimate excuse to be busy with someone else.”

“Veblen espoused the Veblenian opinion that wanting a big house full of cheaply produced versions of modern civilization, and that these copycat mansions away from the heart and soul of a city had ensnared their over mortgaged owners – yes, trapped and relocated them like pests.”

If that’s not a cry for help against a parent, I’m not sure what is. And boy is her mother a presence. Nothing is good enough for her and everything is about her. And this is where all of Veblen’s tics and oddities come into play, at first glance it may seems as though her lack of direction in her life – her use of antidepressants, her inability to finish college, her incessant need to bite her arm when she’s anxious, her floundering around with unchallenging administrative temp jobs, and of course her obsession with nature and squirrels  – is because she’s mentally ill, but in fact it’s all a coping mechanism to keep her sane. Veblen has lived in a world where she was not mothered by her parent, but rather had to be the parent to her mother and this distinction leaves scars on poor Veblen that she has to come to terms with in order to marry Paul.

Paul has a very similar situation, although unlike Veblen who is always trying to keep situations neutral and pleasant, he rebels against his hippie parents who raised him on a commune. His parents are liberal, open and understanding, however they completely neglect their older son in order to take care of their brain damaged younger son. Paul strives for a life completely different than his parents in an effort to make up for his poor childhood of neglect and nonconformity. Instead of trying to “fight the man,” he works for the man at Hutmacher Pharmaceuticals. He dreams of a life with a large house, pool, neutral clothes, and a boat – a far cry from his childhood and the life that Veblen wants.

I have to mention that McKenzie has such a way with words. She plays around with sentences and how words sound. Even the way she has Veblen speak is adorable and fun. The novel, even though it has very serious elements, is littered with random gems about philosophy (especially about Thorstein Veblen, whom Veblen is obsessed with!), facts about nature, and random photos that accompany small sentences in the novel that have nothing to do with the overall plot (I’ve put them randomly in this review so you can understand). It’s really fun and easy to read this novel.

The characters, their families, the squirrel and the medical device all culminate at the end of the book with two very shocking surprises and the ending is something entirely different than what you expect from the beginning of the novel. Very refreshing, sweet, and of all things, humble. People can escape the trauma of the past by accepting and letting go.

So, would  I recommend this book? I definitely would, however I will mention that I found 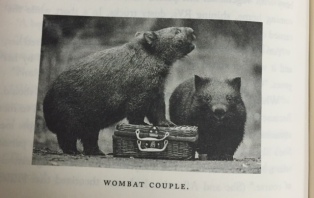 Veblen’s mother, Melanie Duffy  so frustrating at points I had to put the book down. I have to give a nod to McKenzie for her impeccable writing skills with Melanie, because she is so irritating, so selfish, so manipulative that I wanted to go into the novel myself and save Veblen. I know that people will immediately point to Cloris Hutmacher, the heiress to Hutmacher Pharmaceuticals, as the obvious villain, but honestly, Melanie takes the cake. I was very happy while reading the Appendix to see Veblen finally step up to her mother – in another language no less. Also, the squirrel definitely teaches Melanie a lesson a well, which made me very proud.

Another thing that I thought was fun about the book is the little references alluding to mental illness. Veblen’s father Rudgear has deep psychological problems due to his trauma in Vietnam and was a horror to Veblen when she was a child for the two weeks that she would spend with him a year. As an adult, she visits him in a mental institution, however he’s less like a father and more of an inconvenient and emotional acquaintance. Due to her father being in a mental institution, Melanie is convinced that Veblen might have some psychological problems that stem from being related to Rudgear, completely unaware that her behavior through out Veblen’s life would cause more damage than Rudgear or his genes ever could do to Veblen. There are little hits alluding to mental illness like Veblen taking antidepressants. Veblen being terrified to show any type of strange behavior in front of her mother, for fear of being taken to the doctor and diagnosed (her mother should be in a straight jacket honestly…). Also, the incessant biting the Veblen does to her arm. The need to put on Ravel’s Bolero when she’s driving with the caught squirrel (Ravel went crazy while writing Bolero). Rudgear’s room  has photos of Van Gogh’s sunflowers on laminated placemats taped to the wall by his bed (Van Gogh went crazy shortly after painting the sunflowers). There are just little ditties like this all over the book that I found fun to pick out while reading.

Another thing I have to mention, because I freaked out while reading the book…Veblen tries to relocate a squirrel and goes on a road trip with him in her car that leads to an epiphany of sorts regarding her life. Now the reason I freaked out is because…I’m from NJ and I’ve had to relocate squirrels before because they were pests in my house (I’ll call them pests! Whatever!), but it’s illegal to do this in most states BECAUSE squirrels are incredibly territorial! They have one spot that they make with their family and that’s it. So if you try to relocate a squirrel it will either, come back to the same location OR it will be killed in the new environment you put it in, because other squirrels will attack it because again, they are very territorial! If Veblen was as much of a squirrel nut as she claims to be, she would have known all of this! I was happy to see that in the end, she just brings back the squirrel to where she found it and her and Paul becomes friends with him, but I was shocked to see that she would even think about it moving it in the first place.

Aside from that little tidbit, I would definitely recommend the book. It’s fun and easy and also raises ethical questions regarding pharmaceuticals and family life. On top of that it’s funny and the prose is delightful. Let’s all go outside and look for some squirrels!