I know this is supposed to be blog about books, but a movie review never hurt anyone. I thought I would stick with the 1960’s Italian movie genre and do a review of I Fidanzati. 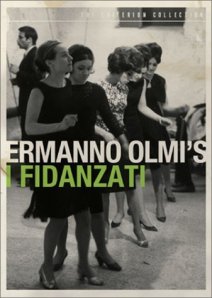 Ermanno Olmi’s I Fidanzati (which translates into The Fiances) is a 1963 Italian film about two lovers, Giovanni and Liliana, who are forced to be in a long distance relationship. Giovanni is transferred for a year to Sicily away from his fiance, Liliana, in Milan. With the separation comes worrying, good-byes, distance, loneliness, and waiting. Giovanni must spend his time alone in a different town without any friends or family. Liliana must adjust to life in Milan without her fiance. So, even though the two are in different locations, they are basically experiencing the same adjustment period, which in turn makes their relationship stronger.

Now, I could do a full summary of this movie like I normally do, but this isn’t the type of film that necessarily needs a full description, mostly because nothing really happens in the film. I think what Olmi is trying to get across, or at least, what I go out of the film is a certain tone. The tone changes through the film too. At times it is about celebrating like going to a carnival or going dancing. Other times it is about adjusting to a new location and making friends. But most of the time it is the feeling of newness. Whether that be the newness of love, or a city, or friendship, or even the rekindling of a relationship. Olmi does an incredible job of depicting that newness with Giovanni. The way he depicts Giovanni interacting with Sicily and his new job, apartment, friends is all very relatable. Everyone has experienced that newness and Olmi captures it in such a clear, visual way that you can’t not like the film.

Also, the film doesn’t take itself too seriously. There are so many scenes with Giovanni just having fun in Sicily, whether it be exploring the area or interacting with his flatmates. One of the best parts of the films is when Giovanni goes to a festival in the middle of the town (the picture is up above). The camera just has fun and people are drunk, waving at the camera, at one point the camera is even smacked by a group of people that are dancing and stumbling about. It’s like a reality show before reality shows.

However, the best part of the film is when Giovanni and Liliana start writing letters to each other. They don’t start until almost half way into the film and they are so passionate and truthful that you really get a feel of how much the fiances love each other. You also learn how they came to be fiances. They met at a dance hall, the very same dance hall that the film opens with, (as an aside, there is almost no dialogue in the film and most of the dialogue comes from the letters that the lovers write to each other) and their relationship blossomed through dance. However, Giovanni had a lingering eye and started an affair with another girl he met at the dance hall. Rumors spread through out the city and Liliana finds out, confronts him, and says that she still wants to marry him as long as he still wants to marry her. Hence their cold feelings towards each other during the beginning of the film (and pictured below).

Yet, the letters that the fiances write to each other are so beautiful and full of love that they really allow the characters to blossom. Moreover, Liliana’s character blossoms through her letters. We have an understanding of Giovanni through watching him interact with his relocation in Sicily, but Liliana’s character is lost. Olmi allows the viewer to see and understand Liliana through her letters, so her character isn’t left out. Her voice really outshines Giovanni’s by her writing and I personally love anything that takes the written word and highlights it to express a character. What was once a sad and failing relationship becomes a much stronger, much more truthful relationship. Liliana comes to recognize, through the separation and her constant contact with Giovanni through writing, that they were more alone when they saw each other everyday because they never actually spoke to each other. Liliana says ever so eloquently, “But we’ve never really spoken the way two lovers should. We each kept out thoughts to ourselves and were content just being together. But perhaps our being together was becoming a habit and we didn’t realize were alone.”

This statement really shows how people in general take for granted their relationships with others because they see them all the time. When you see less of the person and are forced to make each moment together special, the value of your relationship really stands out and there is more of an appreciation of time and moments spent together. This for me was incredibly moving and transgressive in that, distance can some how put life and your priorities in order.

What I really liked about the film is that it didn’t take itself too seriously. There is this feeling that even though Giovanni and Liliana are depressed or lonely, they are still able to have fun and express their emotions by either dancing, or swimming, or even writing. Also, what I find myself looking for in films is something that is leisurely and easy to watch and I can’t think of a film that is easier to watch than I Fidanzati. It’s beautiful, the music is very light and leisurely, it’s much more visual than plot heavy, and after watching I was left with a positive feeling about how to experience life. Giovanni and Liliana can choose to be upset about their situations or make the worst of their relationship, but instead they become closer and rekindle what they once lost. They essentially turn a negative into a huge positive and personally for me,  during this particular part of my life, I need to see something like that in film to feel a sort of validation about the choices I’ve made in my life.

So, would I recommend this film? Yes, yes I would. So, go out there and watch it!